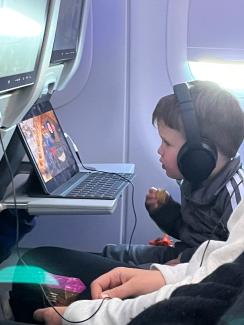 Not so Frequent Fliers

I’d rate my ability to travel efficiently to be better than most, especially when it comes to air travel. Years of experience have honed my skills from booking, to packing to flying and I have many battle scars to prove it. Like most frequent fliers, I’ve been delayed, cancelled, rerouted, or missed flights for just about every reason. As they say, what doesn’t kill you makes you stronger. But none of the wisdom I had accumulated would prepare me for flying with a two-year-old.

A typical flight for me would be (hopefully) very uneventful. I’d get situated in my seat, put on my noise cancelling headphones and pick up my book. Under most normal circumstances, I wouldn’t look up from said book until we had arrived safely at the gate and it was time to deplane. Even during our trip last year where we took Kyle to Florida in 2021, he watched movies from wheels up to wheels down and didn’t cause much trouble at all. Much like me, he can get into a zone in front of the TV and tune out the world – which is a godsend when flying with a child. On our most recent trip to Miami over Thanksgiving, however, we took both boys and the 2 ½ year age gap between Kyle and Ryan was abundantly clear.

Kyle maintained his status-quo, settling into a couple of movies and enjoying the fact that mom and dad weren’t trying to turn the TV off. Ryan, on the other hand, had a different idea of how he wanted to spend the 3-hour flight down south. While we avoided any crying and temper tantrums, Ryan seemed to have an ungodly amount of energy for a child who was woken out of a sound sleep at 4am. He has also never been a fan of watching TV for more than 20 minutes, which proved challenging when you’re confined to an 18-inch square seat on a plane. The poor people around us must have heard the words ‘airplane,’ ‘fly in the air,’ and ‘suitcase’ a hundred times during our relatively short journey as he shamelessly pointed his finger around the plane and directly at passengers as they boarded. Even those who were smart enough to have headphones on could not escape his wrath as he was putting his arms between the seats, climbing up the back of his chair and dropping his toys all over the floor. For Jill and I, it was an eventful, and quite exhausting, few hours.

While the time on the plane was a challenge, it was the things I hadn’t thought about that also threw me for a loop. The extra carry-on suitcase, the additional lead-time getting to the airport and through security, entertaining the kids in the airport, etc. made the travel process far more involved that I’m used to. It was an experience to remember, to say the least, and is yet another colorful chapter in the history of my travels. Despite how well Ryan tested our resolve during the flight, I’d say overall the trip was a success and something I’d happily do again. I’ll stop short of saying that we’re ready for a flight to Europe, however.