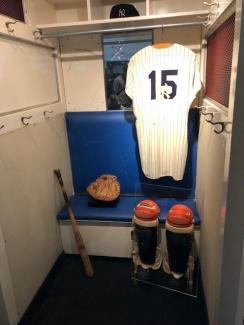 Recently I went to Yankee Stadium with some friends to see a Sunday afternoon ball game. It is so much more convenient these days to get to and from the stadium. The Metro-North train line runs directly from New Haven to the Stadium without transfers. To simplify the process a bit, we left from the West Haven station. Doing so, we did not have to deal with driving into New Haven, finding a spot in the parking garage at Union Station and navigate some 30 tracks to get to the designated train. At the West Haven station, parking is very simple and free on the weekends, and there are only two sets of tracks to deal with. There is a kiosk on the platform, but we purchased our tickets in advance, online through the MTA eTix app, so the process was painless. The train left West Haven a little after 10:00 AM and we pulled into Yankee Stadium at 12:05 for a 1:00 game. I have not been to a game in a couple of years so I must admit I was feeling excited about this little adventure.

There is nothing like the moment when you enter the stadium and first see the field and electronic scoreboard. We had plenty of time to get to our seats before the first pitch, so we ventured to the Yankee Museum inside the stadium. I have never been to the museum but have heard so much about it and I was not disappointed. There was so much Yankee history to absorb regarding so many iconic players. The 27 championship trophies alone were amazing. The perfect game, thrown by Don Larsen in Game 5 of the 1956 world series, was the centerpiece of the museum. This moment was captured via a life size statue of Larsen releasing the final pitch to complete the perfect game, the trajectory of the ball being depicted ending up 90 feet away into the catcher’s mitt held by the famous Yogi Berra. It was so cool. What moved me the most was an exhibit of Thurman Munson’s locker. His jersey, mitt, and shin guards waiting for him to come and play one more game. Even the exhibit about the history of the baseball cap, dating back to 1920, was interesting.

Time to hit the concession stand because a visit to Yankee Stadium is not complete without a hot dog and peanuts. We had great seats on the field level on the first base line. Once seated, it is so much fun to just people watch. You see the die-hard fans wearing the jersey of their favorite player. People with baseball gloves (not just children) hoping for an errant flyball to come their way. No matter how many times I attend a game, there are certain things that are moving, fun to participate in and make attending a game that much more memorable. The National Anthem, being part of the “wave” of fans standing and waving their arms as the wave moves around the stadium, and of course the singing of YMCA and Take Me Out to the Ballgame. It is impossible to not participate with a huge smile and enthusiasm. The scoreboard is a statistic machine. As each player was at bat, his obvious statistics were displayed along with some obscure ones. This player leads the league with the fastest bat speed or highest ball trajectory. Who cares? Then there is the ball game itself. We saw a pitcher’s duel and some great defensive plays for seven scoreless innings. The Yankees ended up losing to the Mariners, but we were winners regardless.

After a 2-hour train ride back to West Haven and a quick bite to eat, it was time to head home after a long day. It was such a great experience, no issues, a lot of laughs, some great conversation and most importantly time with friends and the creation of memories.