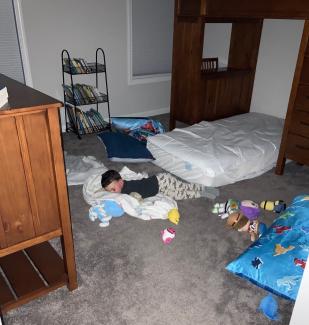 With Kyle knocking on the door of his third birthday in September, I was beginning to wonder what all the hype was about the ‘terrible twos.’ Kyle had rarely tested our resolve, even through a year of COVID protocol when we spent way more time at home than normal. Not for one second did I have any reason to think that would change. Of course, just when you get comfortable, reality hits, and it hits hard. What should have been a relatively seamless transition from the crib to a bed turned into an absolute nightmare. The sweet, animated and loving child we once had turned into a demon, capable of wearing down even the most strong-willed parent.

Friends and family tried to help with their anecdotal advice: ‘It’s just a phase,’ ‘It will get better,’ ‘He will figure it out.’ Standing there at midnight, watching Kyle in the midst of a meltdown, I found all of these words of encouragement extremely hard to believe. It came as a surprise for so many reasons, but mainly because of how quickly things spiraled out of control. We went from having a dream child on a Wednesday to an absolute terror on Thursday. Unfortunately, I’m granted very little sympathy from other sleep deprived parents, many of whom are quick to remind me that Kyle has been virtually perfect (at least in the sleep department) since he was born. That thought provided Jill and I very little solace at 4am with Kyle screaming from his doorway.

We tried it all. Nothing worked. Each day our patience wore thinner. After two weeks of nearly sleepless nights, it was downright unbearable. And it wasn’t just bedtime that was tough. He wasn’t napping, either. Kyle was even more sleep deprived than Jill and I, which meant he was less than pleasant to be around during the day as well. His once jovial, energetic and caring nature became sour, defiant and aggressive.

Hours of frustration would culminate during the nighttime routine when he would prevent us from brushing teeth, refuse to give bedtime hugs, rip off his clothes and scream incessantly that he doesn’t want to go night-night while running around the room. Eventually, teary-eyed and exhausted, he will pass out mid-sentence while speaking nonsense to Jill (because he did NOT want daddy in the room). This was subsequently followed by a 1am and 4am wake up call because he ‘wanted mommy.’ By 5am, it was sunrise. Which, to Kyle, meant it was time to get up for the day because it was now ‘sunny time and we don’t go night-night during sunny time.’

After a solid two weeks, the morale of the troops at the Morrone household was low. Faced with our last resort, we finally decided to let him ‘cry it out.’ In many ways, it was heartbreaking. No parent wants to see their child upset, and even once he had pushed us past our breaking point, we both hated seeing him so distraught. He cried for what seemed like hours, gated in his room, at times, screaming on the top of his lungs (shockingly, Ryan slept through all of this and their rooms are adjacent to each other). He tore apart his bed, and finally, finally, passed out in the middle of the floor. That was our rock bottom.
Side note – during this time we found out Ryan had a double ear infection, Kyle was getting bloody noses and also had a sinus infection (which may explain the erratic behavior). Talk about the perfect storm!

It took a few more days to get back into a ‘good’ routine, but now bedtime is pleasant again. Kyle sleeps through the night, in his big boy bed, and likes to remind us that he ‘did it all by himself.’ I can now add sleep training as a notch on my belt of parental achievements. It was hard earned, and both Jill and I have the battle scars to prove it. Fingers crossed that Ryan handles this one a bit better than his big brother.