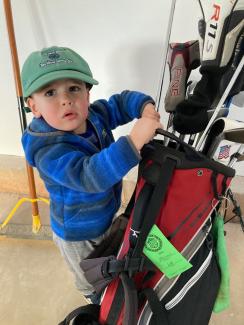 It takes a very special person to work in a daycare. The thought of voluntarily watching other people’s children, even for pay, is something I can’t wrap my head around. You’re either nodding in agreement to that last comment or starting to think I’m a terrible person. I hope it is the former. There are the obvious necessary qualities that one needs to happily surround themselves with defiant toddlers each day, and that means being caring, compassionate, creative, nurturing and, of course, having an unwavering love for children. I’d venture to guess that these are the minimum criteria it takes to walk through the door of a daycare each day and enjoy your job. I think, however, that there are some personality attributes that separate those that are merely good teachers from the exceptional. These include a combination of master negotiation skills, military style disciplinary tactics and the patience of a Buddhist Monk.

It is a tall order, for sure, which gives me an incredible level of respect for all teachers, but especially those that are tasked with chasing pre-K children around each day. And Kyle is not just any pre-K child. He breaks the mold in many ways, and his teacher, Ms. Ellie, has the monumental task of keeping him focused, calm and out of trouble. Ellie is quick to remind us of how busy Kyle is at school, how he is into everything, how curious he is and how observant he is. The only reprieve she has from his feverish amount of energy is when he takes a much-needed nap, which may only be an hour, and I am sure she enjoys the quiet time more than anyone.

As a side note, Kyle doesn’t miss anything (as my mother would say, much like his father). If there is a new toy in the room, he’ll identify it as soon as he walks in. A change in the decorations from fall to winter, he’ll be pointing out the snowflakes within seconds and ask where the leaves went. If you yawn, he askes if your tired and if you need to go to sleep. Blow your nose, he’ll ask if you’re sick. As a parent witnessing this all for the first time, it blows my mind. Just don’t drop an F-bomb around him, he won’t soon forget it – he also has the memory of an elephant.

Ellie has an innate ability to ‘tame the beast’ that is Kyle. He listens to her in a way that he won’t anyone else. It is amazing when we step into ‘Ellie’s house,’ as Kyle calls his classroom, and how much he cleans up his act. He doesn’t start running around and demanding that we ‘play toys’ or start jumping on his classmates (although we have had to sign several ‘incident reports’ for those moments when Kyle has stepped out of line…). Even our friends who see Kyle at school have mentioned that Kyle is much more docile under Ellie’s watch. She runs a tight ship, and that is exactly what he needs.

I don’t know what her secret is, and that is the beauty of it. Maybe we’re too soft at home, but it is so hard to say no to a kid that is as well-behaved as Kyle. He has incredible manners for a two-and-a-half-year-old, is caring, loving and is constantly watching out for his brother. Aside from his immense amount of energy, he is usually a dream to be around. Until he’s not. Kyle still has his moments; he is just over two, after all. He is now in the phase where he not only knows the word ‘no,’ but knows how to use it. If I ask him to put on his coat when he doesn’t want to, he’ll yell ‘NO!’ and stand there and fold his arms. Ask him to try a new food that he’s not in the mood for, ‘NO!’ again. Try to take him out of the bath before the water is a murky brown and freezing cold – you could be in for a meltdown.

Ellie certainly has her hands full with Kyle, but the scary part is that our second act hasn’t even started yet. As Ryan starts to develop his own personality and become mobile, it is becoming abundantly clear that we are going to have another busy boy running around. His level of curiosity is off the charts, and he is fascinated by everything that Kyle is saying and doing. Poor Ellie is going to have toddler Morrone part 2 in the not-so-distant future. Jill and I couldn’t be happier!