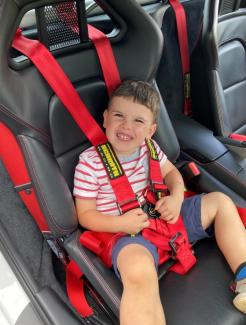 Nothing makes my heart melt more than when Kyle asks me, ‘Daddy, can I go for a ride in your race car?!’ I may be wired differently than most, but the fact that he has taken interest in something that I’m passionate about struck a nerve I wasn’t expecting. Unfortunately for Kyle, my answer to that question has always been a resounding ‘no’ – due entirely to a lack of a proper car seat. He’s asked dozens of times, and his usual response to when I tell him that he can’t is ‘ok, daddy, when I grow up I can?’ His persistence recently paid off, and you can only imagine his surprise when I said ‘yes!’ this past weekend and offered to take him for a ride.

Now before anyone judges my parenting decisions and thinks I just threw a 3-year-old in a race car and flew around the block, I guess we should clarify the definition of ‘race car.’ It’s really a normal street car, albeit with some modifications that make it safer for driving on a race track. It’s never seen wheel-to-wheel racing action (and likely never will), but it has seen its share of time on tracks throughout the Northeast. Complete with bucket seats, a roll bar and 6-point harnesses, I can see how Kyle easily confuses it with Lightning McQueen in the Pixar movie, Cars.

Semantics aside, he was thrilled. When he jumped in the passenger seat, his head didn’t make it to the window, and with the door shut, you couldn’t even tell he was sitting in the car. As you could imagine, he is far too small to use the standard 3 point seatbelt that adults use, but I was able to strap him into the safety harness quite securely. At the very least, it was a far safer setup than the lap belts used in 1950’s automobiles. Heck, I remember sitting in the middle of a bench seat in the front row of my grandparent’s station wagon with no seat belt at all… oh, how times have changed.

We drove off and took a quick spin down Route 146 in Branford. Despite Kyle’s most dire pleas to go ‘really fast!’ I had to keep it in check. The last thing I need is to get pulled over for speeding or reckless driving with a 3-year-old strapped into harnesses in the front seat – not a good look. He was fascinated by the ‘old school’ manual transmission, and I let him help shift. You would have thought I let him push the red button launching the Apollo 11 rocket, he was thrilled.

With a big smile, he said he was going to tell all his friends that he went for a ride (then proceeded to list them by name, which is quite an extensive list!). As we pulled back in, he asked ‘that was really fun daddy, can we do it again? Can I drive your car when I grow up?’ I told him, ‘of course, as long as it is ok with mommy.’