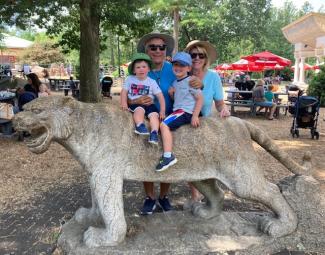 A Trip to the Beardsley Zoo

When our kids were toddlers, Cathy and I took them for a day trip to the Beardsley Zoo for a day of adventure! Granted, it was not the Bronx Zoo, but it was a much shorter drive to Bridgeport, than New York, with two small children in the car asking, “are we there yet”? We have not been back to that zoo since then, until recently. This time it was with our grandsons. Memories came back to us from when we visited years ago, and we created new memories with our grandsons at the same time. That morning, Jill dropped off the boys at our house along with packed lunches for them, water bottles, snacks, clothes, and a variety of items to bring along on our little excursion. We had packed sandwiches and bottles of water for ourselves that we nicely placed in a little cooler. We loaded all the bags, including the stroller and cooler, in the back of our vehicle. At this point, if there was something that we forgot to bring we would buy it at the zoo. We buckled the kids into their car seats and hit the road. It was not too long before the boys were asking the same question, “are we there yet”?

We arrived before 10:00 so the zoo was not that crowded yet, but it was already getting warm. I looked like a pack mule with Ryan in the stroller and bags stuffed underneath and a cooler hanging off the side. As I looked around, we fit right in with the crowd as everyone seemed to have their strollers overloaded with items, not just kids. Kyle and Ryan had been to the zoo before, and Kyle was like our tour guide. He knew which animal exhibit was next and would tell us a little tidbit of information about what we were seeing. All the animals you would think were there. We saw tigers, cheetahs, leopards, bald eagles, monkeys, alligators, otters, an ostrich, a variety of birds, a sloth, and other creepy crawly things. My favorite was the ant eaters. It is not every day you see one of those and I was amazed at how large they were. The ant eaters were bigger than me. Very cool.

Around noon, we found a picnic table in the shade for a lunch break. Now that we were all recharged with food in our bellies, we explored some more and saw additional animal exhibits. It was now very warm and a perfect time to cool down with an ice cream. It was the quietest the kids were all day as they devoured their ice cream. I must admit, I was doing the same as they were and was eating the ice cream a little too fast and had a “brain freeze”. I have not had one of those in years. Once we cleaned faces and sticky hands with wet napkins, we were off to the wishing well to throw coins into the water. The concept of a wishing well was interesting to Kyle. I kept handing him coins and he kept throwing them as far as he could watching for the splash. I finally asked him if he was making wishes when he was throwing the coins into the well. He responded, “I wish that my pet goldfish does not die”. Off to see something else!

It was now early afternoon, and the zoo was officially hot and crowded. The kids were slowing down and so were we. It was time to start making our way back to the car for the trip home. As we loaded the stroller, bags, cooler and kids back into the vehicle, the heat really kicked in. The A/C was a welcome treat and made the ride home extremely comfortable. The kids were chatty all the way home about all they saw and did that day in the zoo. Cathy and I thought for sure they would fall asleep, but they never missed a beat.

It was a wonderful day at the zoo and hopefully the boys enjoyed themselves as much as we did. Seeing them so excited is what it is all about. Next time we might try the Mystic Aquarium?