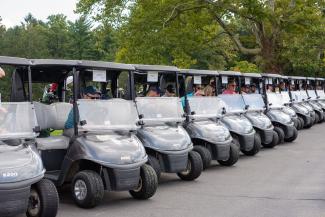 I can now say confidently that our first golf tournament was a smashing success. What was admittedly a massive undertaking came together in spectacular fashion as we narrowly avoided two thunderstorms and were blessed with a warm and sunny fall day to welcome the 104 golfers who showed up to support the Connecticut Brain Tumor Alliance. Had you told me earlier in the year that we would have sold out our golfer quota and had over 130 people for dinner, I would have told you that you were crazy. Thanks to the strong support from our family, friends, and those in the CTBTA’s network, however, even my wildest expectations had been exceeded.

The day was made even more special thanks to the generous donations from the many individuals and businesses in our community. From simple cash donations to full blown corporate sponsorships of the tournament, the outpouring of support was truly humbling. Even more touching was the sheer amount of people that made it their priority to participate, including our volunteers who helped make the day run smoothly. For some that meant taking time off work or traveling from out of state. We could not be more grateful for the unwavering commitment from everyone who played a role in making the event memorable.

Anyone that has planned a large-scale event, or even a wedding, knows that these types of things take months of coordination to pull together successfully. And while it is relatively easy to sign a contract with a venue and pick out a menu, it is the attention to detail that makes an event feel special. I can take very little credit for the details, which felt squarely on Jill. She was faced with an impossible task – especially not being a golfer and never having attended a tournament before – and handled it like a pro. I think everyone was able to appreciate her hard work, and the graphic design skills of her sister, Amy, which made the overall experience feel even more polished.

Being a charity event, there was certainly a buzz given the many ties that people had to one another and the organization. I was amazed to learn how many people are connected to the mission of the CTBTA given their personal experience with brain tumors. Planning this event was an eye-opening experience for me I had countless conversations over the past few months and learned a lot about many of the people whom I already considered to be closely connected with. It quickly became clear that loss or hardship due to brain tumors was not nearly as rare as I had once imaged – which is a terrifying thought and highlights the importance of the work that the CTBTA does. The stories from some of the survivors are nothing short of medical miracles and those who lost a loved ones seemed eager to be part of a support system for those who are caring for a relative undergoing treatment. For most people in attendance, the cause was personal, and it showed.

When it comes to defining success for an event such as this, there is always the qualitative and the quantitative. Admittedly, the weather helped make the day even more enjoyable, but it was clear based upon the smiles on everyone’s faces that a good time was had by all who participated. The golf course at New Haven Country Club delivered a challenging and fun round for all and remains in some of the best condition I’ve ever seen it. Following golf, the clubhouse staff delivered in spades with some great food and drinks to end what was already a great day. From a fundraising standpoint, we also outperformed and exceeded our initial goal by $20k. It is heartwarming to know that the CTBTA will be able to use these funds to expand their outreach program and continue to raise awareness in support of patients, caregivers and families who have been affected by a brain tumor diagnosis.

Speaking from a personal standpoint, I was overjoyed and humbled to see the engagement from the many people in my personal network who help to make this a successful event. I want to extend my most sincere gratitude to all who donated, played or attended the reception. I’m very fortunate to be part of such a strong and generous community and it meant the world to Jill and I to have your support.