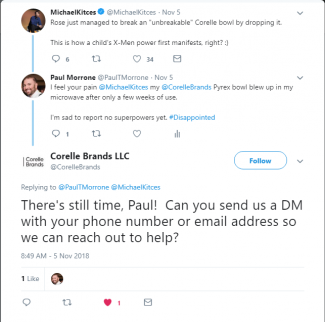 Working in a profession where customer service is valued so highly has forced me to go through life having what many would say are unreasonable expectations. I also realize that there are costs to receiving a higher level of service and I’m usually willing to pay for it with the understanding that I’ll be taken care of. That’s why it should come as no surprise that when I do have an expectation-exceeding experience, it’s worth talking about. It’s even better when it’s totally unexpected. Hats off to Corelle Brands (owner of the kitchenware companies Corelle, Pyrex, Corningware, etc.) for a rapid and efficient response to a problem I didn’t even know I had.

Last week, I was trolling my Twitter newsfeed last week when I saw one of the people I follow make a comment about how his wife broke an ‘unbreakable’ Corelle dish, and how this may be a sign she may be developing super powers. I had a similar experience not too long ago with my Pyrex bowl (Pyrex is owned by Corelle) when it blew up in the microwave while I was reheating leftovers. I decided to inform him of my experience, and that, sadly, I hadn’t seen any changes in my physical abilities.

I made my comment at 8:14am and didn’t think another thing of it and went on with my day. Next time I logged into Twitter I saw a tweet by Corelle Brands in response to my story. They had responded within about a half hour from my original tweet and by 8:49am had already initiated a conversation with me and requested I contact them privately so they could remediate the issue. During a quick online back and forth over email, they were extremely apologetic and asked for my shipping address to replace my broken bowl. By the end of the week, I had a new bowl sitting on my front steps, free of charge.

Had something much more expensive, like a new TV or an appliance, blown up unexpectedly, I would have been pissed to say the least and would have gone out of my way to notify the manufacturer and demand a replacement. We bought the Pyrex bowls as a set of 8, and with 7 bowls left after this one broke I called it bad luck and moved on without another thought of it. Given its nominal value, I wasn’t initially frustrated by the fact that the bowl broke, but more from the inconvenience of having to clean up the mess it made in the microwave. Even more painful was the loss of my lunch, and I was starving that day. Either way, the unexpected and efficient response by Corelle Brands took me by surprise and I felt it was worth sharing!