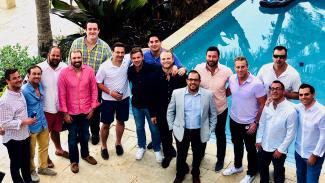 I haven’t been on a bachelor party in well over a year, so it was long overdue when my closest friends got engaged. As you could imagine, rumors of a bachelor party quickly started flying around. Interest in attending was high as many new or soon to be parents were looking for an excuse to get away for a few days and relax in the warm weather (kid free, of course). The problem is, when you have 16 people to account for and don’t want to have a bunch of separate hotel rooms the options are limited (and often pricey). Kudos to the best man in the wedding for searching near and far for suitable accommodations, which landed us in an Air BnB in Ft. Lauderdale, FL. After seeing the place firsthand, simply calling the place suitable would be an understatement at the least and an insult at the most.

We found ourselves in a mansion located directly on one of the many intercoastal waterways that Ft Lauderdale is famous for. In addition to the waterfront location, we were within walking distance to the beach, restaurants and bars. The 8 bedroom home required us to double up at night, but seeing as each room had a private full bathroom and balcony, this wasn’t much of an issue. We also had a pool and hot tub on-site, along with an outdoor kitchen, pool table and a great room with 40 foot ceilings. Needless to say, a group of 16 guys had no business being in such a nice place.

While golf was eliminated from our agenda as some folks didn’t play, we did find ourselves on a boat cruising the waterways and soaking up all the area had to offer. Ft. Lauderdale is to boaters what Myrtle Beach is to golfers, a mecca to say the least. Million-dollar boats are as common as Toyota Camarys, but the yachts really steal the show. There were several docked at the larger marinas, many valued in the $100-$200 million-dollar range. Their size was staggering and dwarfed the ‘small’ yachts around them, which alone probably cost over $50 million.

Aside from the groom, this weekend was also special for me as the groom was my college roommate at Bentley for all four years we were there. This meant that I not only got to spend time with some of my closest friends from CT, but also got to see many of my college friends who joined us on the trip as well, several of which travelled from distant parts of the country. While we generally kept ourselves in check, there were plenty of laughs, good food and late nights to go around. The weather was picture perfect and provided many of us from the Northeast a much-needed reprieve from the cold and wet spring we have been having. As quick as it started, it was time to go home. And no one was more eager than me to get home to Kyle after not seeing him for four days.