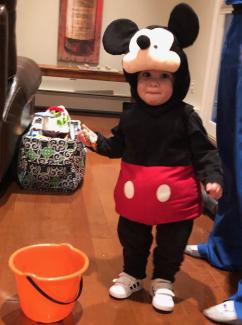 In my personal ranking of the annual holidays, Halloween falls pretty low on the list. It’s not that I’m against the concept, but once I hit high-school age (and learned what a cavity was) I just didn’t get as much of a rise out of dressing up and eating tons of candy. Through college it became a reason to party (like we needed one), and after college it was just another day of the week. Last year was the first year I looked forward to Halloween in about two decades, no doubt because of Kyle. At a whopping two months old, Kyle’s first Halloween experience was limited to our living room, but was fun nonetheless. It was an excuse to put him in a cute outfit, take a picture or two and show him off to all the children that came to our door. This year, Kyle was mobile. And that meant actually going out to trick-or-treat.

Kyle didn’t have the stamina to do a 100-house marathon that say a 10-year-old would, but we did get him dressed up (as Mickey Mouse), gave him an orange bucket for his candy and crossed our fingers that he didn’t rip off the Mickey head for the 15 minutes we needed him to stay dressed. Fortunately, he was distracted by everything going on and was more concerned with taking candy in and out of his bucket to notice that he had a mouse nose and ears on his head. With the sun going down, we strapped him into his red wagon and off we went.

Kyle stomped his way from the street to our neighbor’s front door where they were waiting for him with a platter of candy. He wasn’t sure what to do at first but got excited when he realized he could grab the fun-sized candy bars and put them in his bucket. He then took the candy out of the bucket and threw it on the ground, laughed, and repeated the process. We made it to one more house before he lost interest, but it was fun nonetheless. Of course, we had to come home and eat some of the candy that we just got. Next year will be much busier, and at the rate things are going it will be here before we know it!